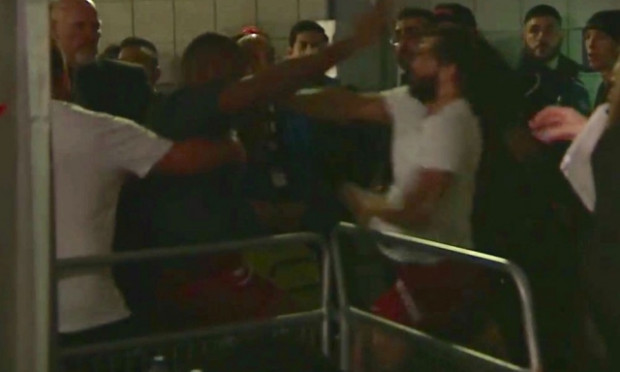 Masvidal, who just moments earlier knocked out Darren Till in the main event, was in the middle of an interview with the UFC/ESPN reporter Laura Sanko when Edwards interrupted.

Words were exchanged, and Masvidal walked out of frame to confront Edwards, who’d earlier in the night bested Gunnar Nelson.

“Come over here, say that to my face,” Masvidal could be heard saying as he walked away from the interview and toward Edwards.

Edwards appeared to be restrained when Masvidal confronted him. Masvidal threw a short combination of punches. The ESPN feed was quickly thrown back to the commentary desk led by Karyn Bryant and newly ninted UFC Hall of Famer Michael Bisping.

You can watch the incident here:

It was a jarring sight and an unfortunate turn considering the moment Masvidal had seized just moments earlier when he knocked out Till. Masvidal didn’t gloat over his win and praised his fallen opponent while asking the UFC for a title shot and performance bonus.

At the post-event press conference, UFC executive David Shaw announced Masvidal had won two bonuses, taking home an additional $100,000 for “Performance of the Night” and “Fight of the Night.”

Shaw said it’s too early to tell whether Masvidal will face any sanctions. He praised the promotion’s security teams for restraining both parties.

“This has all happened in the last 15 minutes,” he said. “(UFC President Dana White is) already looking at it. We’ll review all the details … and take next steps from there.”

“I can’t even believe that this happened,” White said. We need to do a much better job of making sure this shit doesn’t happen at an of our events!!!!”

Just before extracurricular punches were thrown, Masvidal told Sanko, “I said I live for that, and that’s to take the breath out of everybody,” after his knockout victory, which reversed a two-fight skid and followed a 16-month layoff.

“It’s amazing to silence people,” Masvidal said. “It’s a drug that most people have never tasted.”

Sanko later returned to the broadcast to say Edwards’ interruption was about a potential fight in July. She said Edwards was cut by Masvidal’s punches before the two were separated, and corners for both men were involved. Edwards later left The O2, which hosted the event. Masvidal was shown being escorted out of the building.

Edwards and Masvidal have a history of verbal callouts. The U.K. standout called out Masvidal following a win over Donald Cerrone this past June. Masvidal subsequently accepted the offer, but a fight never materialized.

Edwards subsequently accused Masvidal of ducking the fight. Masvidal, meanwhile, said he had no desire to face unranked opposition.