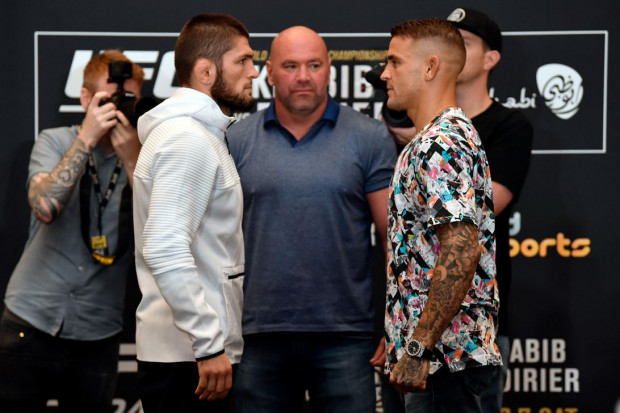 In the lead up to UFC 242, Dustin Poirier had a mantra: 25 minutes to make life fair. Unfortunately for Poirier, life proved to not be fair and he was submitted by Khabib Nurmagomedov in the third round. But though he may not have gotten the outcome he wanted, plenty of good came out of UFC 242, and thanks to the generosity of a few individuals, Poirier can now help make life fair for thousands of other people.

After their fight at UFC 242, Nurmagomedov and Poirier exchanged fight shirts. Then, in his post-fight interview, Nurmagomedov announced that he would be selling his shirt, the one Poirier had just given him, and donating all the proceeds to Poirier’s charity, The Good Fight Foundation. It was a touching gesture and, according to Poirier, one he had no idea was going to happen.

“It was great. I had no clue he was gonna do that,” Poirier told ESPN yesterday. “He raised a lot of money. The biggest donation we’ve ever had with the foundation and we’re gonna do great things with it and he’s gonna help a lot of people out with his contribution. It’s incredible to see the fighters start to donate things and see the growth that the foundation has had in the last year and a half is incredible. I’m really grateful. I have a lot of things to be grateful for and those things make me smile. That’s sunshine for sure.”

Last year, Poirier started The Good Fight Foundation, a non-profit organization where he would auction off fight apparel to benefit local community initiatives. Heading into UFC 242, the biggest fight of Poirier’s life, “The Diamond” partnered with another MMA fighter’s charity, Justin Wren’s Fight for the Forgotten, with the intention of helping the Batwa Pygmies dig water wells with the proceeds from auctioning off his fight gear for the UFC 242 fight. Well the two organizations can now do far more than they were hoping for, as the auction netted six figures, which far surpasses their goals for this event.

"I don’t know if he auctioned it off or if he had somebody offer him $100,000 for the shirt. I haven’t had a chance to speak with him personally to thank him, I’ve only spoken with his manager but he donated the money, it’s in the foundation account, and yeah, it happened. It’s incredible. . ."

“We set the goal of $25,000. I think we overshot that by 7 or 8 thousand. We raised $32,000 or $33,000 for the original goal of the well and the water tower for the Pygmy people but I’m gonna hop on a call at the end of this week with Justin Wren and his organization. He had set an overflow goal of $50K and that would be able to build a few more water wells in neighboring villages and things like that, so I want to go all out and do everything we can so we’re gonna hop on a call later this week and get some more stuff ironed out. We demolished this goal that we had.”

That’s not all though. After UFC 242, Dana White said that he would match whatever Nurmagomedov donated to The Good Fight Foundation. Well, White is apparently a man of his word as after his ESPN interview, Poirier spoke with White and Tweeted out that the UFC President will in fact be matching the $100,000 donation.

Just got off the phone with @danawhite he is matching Khabib's donation to the @TheGoodFightFDN !!! I'm so grateful for the love and support! Thank you all!!!