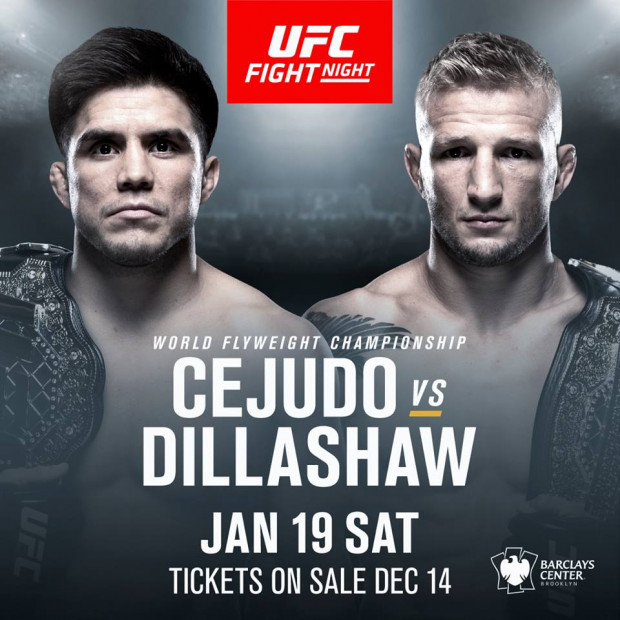 UFC Fight Night: Cejudo vs. Dillashaw (also known as UFC Fight Night on ESPN+ 1 or UFC Fight Night 143) is an upcoming mixed martial arts event produced by the Ultimate Fighting Championship that will be held on January 19, 2019 at Barclays Center in Brooklyn, New York, United States.

The event will mark the first as part of the promotion's five year contract with ESPN and the first to be broadcast on the network's digital streaming platform ESPN+.

A UFC Flyweight Championship bout between 2008 Olympic gold medalist in freestyle wrestling and current champion Henry Cejudo and current two-time UFC Bantamweight Champion T.J. Dillashaw is expected to headline this event. If successful, Dillashaw will become the third man to be champion in two divisions simultaneously and fourth fighter overall (after Conor McGregor at UFC 205, Daniel Cormier at UFC 226 and Amanda Nunes at UFC 232), as well as the seventh person overall to win a title in different divisions. This will be the fifth time in UFC history that champions in different divisions fight for the same title, following UFC 94, UFC 205, UFC 226 and UFC 232. According to sources, the promotion is expected to dissolve the flyweight division at some point within 2019. The pairing was initially expected to take place at UFC 233 a week later, but was moved on December 5.

A women's flyweight bout between Rachael Ostovich and Paige VanZant was originally canceled on November 20 due to Ostovich being assaulted by her husband, resulting in a broken orbital bone. However after getting a second opinion from a doctor, though, Ostovich got the green light to stay in the bout. After announcing that former NFL player Greg Hardy would make his UFC debut at this event, the decision to put him on the same card as Ostovich was met with backlash by many people as Hardy was found guilty of assaulting an ex-girlfriend, and sentenced to 18 months probation as well as being suspended for 10 games by the NFL. The charges and suspension were later dropped after the victim failed to appear in court to testify, but Hardy's arrest and trial were the focus of considerable controversy. UFC president Dana White later claimed that Ostovich was "totally cool" with Hardy on the same card as her.

A women's flyweight bout between KSW Women's Flyweight Champion and promotional newcomer Ariane Lipski and Joanne Calderwood was initially scheduled for UFC 233. However, it was reported on December 2 that the bout had been rescheduled for this event instead.

As a result of the cancellation of UFC 233, a flyweight bout between former UFC Flyweight Championship challenger Joseph Benavidez and Deiveson Figueiredo was briefly linked to this event. However the following day, the promotion clarified plans indicating that the pairing was off and that Benavidez would be an alternate for the headliner bout in the event that either Cejudo or Dillashaw would be forced from the main event. Later it was announced that despite still being an alternate, Benavidez would face Dustin Ortiz in a rematch of his unanimous decision win at UFC Fight Night: Edgar vs. Swanson in November 2014.

A bantamweight bout between Thomas Almeida and Cory Sandhagen was briefly linked to the event. However on December 22, it was announced that Sandhagen would face John Lineker in the event instead.