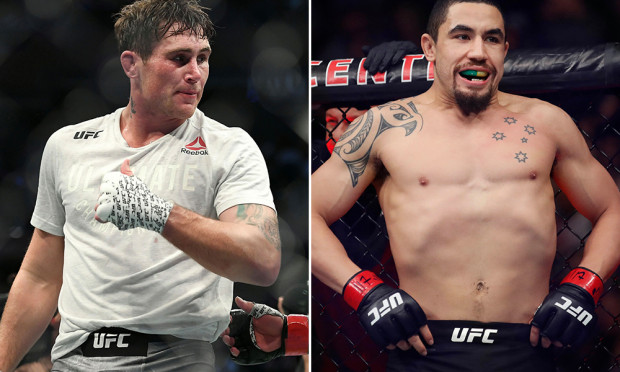 Darren Till vs. Robert Whittaker reeboked for UFC event in July

A middleweight fight between Darren Till and Robert Whittaker has been rebooked.

With their original booking scrapped due to the coronavirus, Darren Till and Robert Whittaker are set to meet at a UFC event in July.

Till and Whittaker were orignally scheduled to fight in the main event of UFC Dublin on August 15th. With the UFC forced to make major chanegs to their schedule. The two top middleweights will headline a card on July 25th.

Till (18-2-1) made his 185-pound debut at UFC 244 in November of last year, defeating former interim title challenger Kelvin Gastelum by split decision. The 27-year-old moved up to middleweight after losing consecutive fights at 170-pounds to former champion Tyron Woodley and Jorge Masvidal.

Whittaker (20-5) has not fought since losing his UFC middleweight title to Israel Adesanya in October 2019. The loss was Whittaker’s first at 185-pounds, and put an end to his nine-fight unbeaten run. “The Reaper” recently discussed his “mental drain” which forced him to withdraw from a fight with Jared Cannonier earlier this year.

The UFC event on July 25th does not yet have a location or venue to its name, however there is a chance it could take place on “Fight Island” — or UFSEA — as the promotion plans to hosts fights on the island for the whole of July.