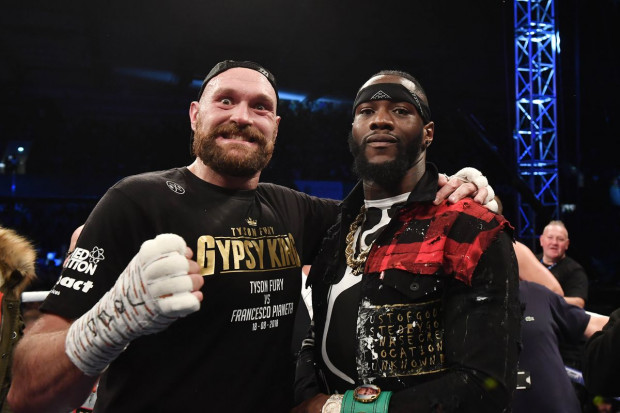 An immediate rematch of the thrilling heavyweight title fight between Deontay Wilder and Tyson Fury is in the works.

On 1st December WBC heavyweight champion Deontay Wilder (40-0-1, 39 KOs) and Tyson Fury (27-0-1, 19 KOs) engaged in a highly captivating fight, with Fury largely outboxing Wilder, but Wilder able to twice drop Fury, including a dramatic 12th round shot that Fury somehow survived. In the end, the bout was ruled a split draw, meaning Wilder retained his title thanks to the last knockdown.

There have been calls for an immediate rematch, perhaps more so than the want of either man to fight WBA-IBF-WBO champion Anthony Joshua (22-0, 21 KOs) next, and it appears if we will get Wilder vs. Fury 2 within the next few months.

Frank Warren (Fury’s promoter), told ESPN that talks are underway for the rematch, but if it does materialize, it likely won’t be in California like the first one was.

“We’re trying to make that fight at the moment, everyone wants the fight and most importantly the fighters want it. The venue is looking like the U.S., that’s where the money is. Tyson was disappointed with the judging with the last fight, as I was, so a lot of things need to be sorted but the U.S. is where they want it, probably in the second quarter. Vegas would be one of the options. I wouldn’t want to go back to California, I didn’t like working with the Californian commission and there were a lot of things we didn’t like there. Tyson is already in the gym working hard, ticking over, and I think we would get it [the fight versus Wilder] before June.” Warren told ESPN.

Wilder vs. Fury I generated eight-figure paydays for both men, along with a better than expected 325,000 PPV buys, one of the best marks on US PPV for the heavyweight division in well over a decade. Heavyweight boxing at the top shelf is worth caring about again, and if all goes according to plan, the rematch should produce even more commercial success and ideally a decisive outcome.