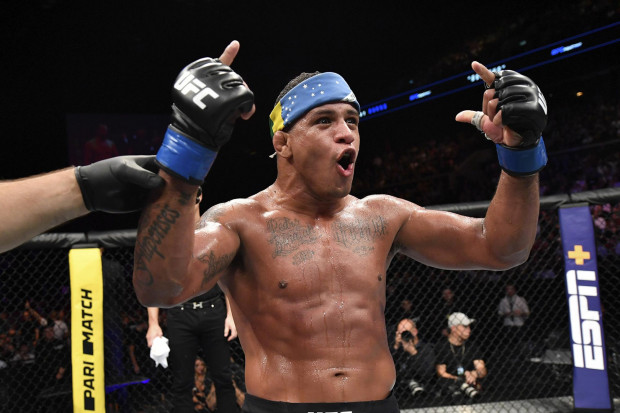 out of UFC 251 main event vs. Kamaru Usman

Gilbert Burns is out of UFC 251 main event vs. Kamaru Usman.

On a day filled with cancellations of fights slated for the UFC’s “Fight Island” series in Abu Dhabi, the biggest one yet has just occurred.

Gilbert Burns, along with his coach Greg Jones, tested positive for the coronavirus. This obviously means that his title bout against champion Kamaru Usman is no longer headlining UFC 251 on July 11th.

While the UFC had only three total cancellations due to positive COVID-19 results in May and June, Friday has produced four by itself.

Gilbert’s positive result comes not long after teammate and ONE Championship star Aung La N Sang also had a positive test for COVID-19. Perhaps that was an ominous sign that UFC 251’s main event was in jeopardy.

Burns was in Las Vegas and set to travel to Abu Dhabi from one of the UFC’s selected “hub cities.” As part of the updated COVID testing protocols, fighters are tested prior to flying to Yas Island, with Friday night set as the day of departure. According to John Morgan, neither Burns nor Coach Jones boarded that chartered plane.

“Durinho” earned his title shot after an impressive decision win over former champion Tyron Woodley on May 30th. Usman, who was his teammate before moving his camp to Colorado to train with Trevor Wittman. This was set to be his second title defense after knocking out Colby Covington last December.