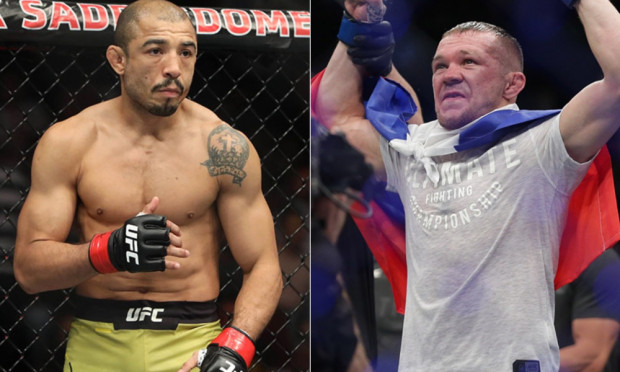 Jose Aldo vs. Petr Yan in the works for vacant UFC bantamweight championship

The UFC bantamweight title doesn’t currently have a holder, but the promotion is looking to change that.

The promotion is working on a 135-pound title matchup between former UFC featherweight champion Jose Aldo and surging Russian bantamweight Petr Yan, UFC president Dana White revealed in an interview with ESPN on Wednesday. White said the bout does not have a set date or location at this time.

“I’ll break this right here and right now – and my people are probably going to kill me for this one,” White said. “Cejudo has retired, so we’re talking right now about Petr Yan vs. Jose Aldo for the vacant title. We don’t have a date or a place set for that, but that’s the fight we’re looking at right now.”

Neither Aldo (28-6 MMA, 10-5 UFC) nor Yan (14-1 MMA, 6-0 UFC) are in the United States. With the current COVID-19 pandemic causing numerous travel restrictions, the two fighters’ potential travel statuses are unknown. Most likely, the fight would take place on “Fight Island,” a creation which White says the UFC is currently working on setting up for this summer.

The UFC bantamweight championship was most recently defended on May 9, when then-champion Henry Cejudo retained against former titleholder Dominick Cruz. Following his second-round TKO, Cejudo announced his retirement. On Sunday, Cejudo was removed from the official rankings. The UFC later announced his belt had been stripped.

Aldo, 33, is coming off back-to-back losses to UFC featherweight champion Alexander Volkanovski and fellow bantamweight contender Marlon Moraes. Prior to the pandemic cancelling all of the UFC’s upcoming international events, he was scheduled to face Cejudo for the title on May 9 in Brazil.

Yan, 27, is yet to lose a UFC bout. En route to his first UFC title opportunity, Yan defeated Jin Soo Son, Douglas Andrade, John Dodson, Jimmie Rivera, and most recently Urijah Faber. Yan was scheduled to headlined the UFC’s first event in Kazakhstan on June 13, prior to the COVID-19 pandemic.