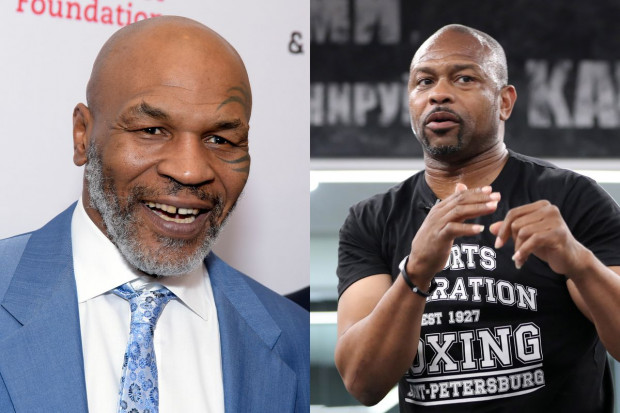 After Announcing "Legends Only League"

Legendary boxer Mike Tyson will reportedly make his return to the ring in an eight-round exhibition against Roy Jones Jr.

According to Kevin Iole the undercard of the event will feature boxers facing MMA fighters. The event is expected to take place in California, but a date isn't yet known.

Iole's report came on the heels of Tyson's announcement of the formation of the Legends Only League.

The 54-year-old Tyson hasn't boxed since losing to Kevin McBride in 2005.

TMZ Sports reports that the card will take place Sept. 12 and will be entitled "Frontline Battle." The event will reportedly be available on pay-per-view and via up-and-coming social media platform Triller.

Per TMZ Sports, Frontline Battle will feature live musical performances from big-name artists, and Triller will stream a 10-part docuseries during the lead-up to the Tyson vs. Jones exhibition with two episodes each week.

Tyson is one of the most famous boxers of all time with multiple reigns as world heavyweight champion. He won each of his first 37 fights professionally from 1985 to 1989, 33 by knockout.

Iron Mike is also known for some infamous moments, including his shocking upset loss to Buster Douglas in 1990 and his biting of Evander Holyfield's ear during a fight in 1997.

Tyson lost three of his final four fights from 2002 to 2005 and dropped off the map for a period of time after retiring. It seemed unlikely he would ever fight again considering some of his personal demons, but he is back in phenomenal shape and has been teasing a return to the ring in recent months.

He appeared at All Elite Wrestling's Double or Nothing pay-per-view in May to present Cody Rhodes with the TNT Championship and then ran an angle with Chris Jericho on the ensuing episode of AEW Dynamite, which led to buzz about a potential wrestling match.

It is unclear if that is on the table, but an exhibition boxing match against Jones promises to get the combat sports world buzzing.

While Tyson is a cultural icon, Jones is a huge star in his own right in the boxing world. The 51-year-old fought professionally as recently as 2018 and owns a career record of 66-9. Although the quality of his opponents dropped as he got older, he has won 12 of his past 13 fights.

Tyson vs. Jones is a fantasy matchup that never came to fruition, but even with both men in their 50s, it is a fight boxing fans will unquestionably have interest in.