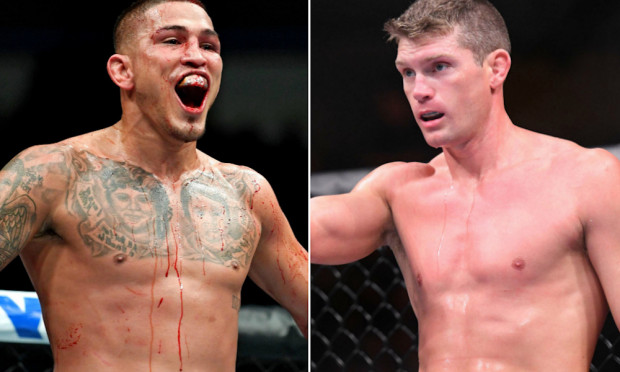 What about Stephen Thompson vs Anthony Pettis?

The former UFC lightweight champion and one-time interim featherweight title challenger Anthony Pettis is looking for fresh challenges in 2019 as he took to Instagram on Friday to ask fans if they want to see him move up to 170 pounds for a potential fight with Stephen Thompson.

“Heard somebody is looking for a fight. What do you guys think? Take my talents to WW and take on the boy?”

A day after Anthony Pettis stated he might head up to 170 pounds to face Stephen Thompson says he would gladly welcome the former UFC lightweight champion to the welterweight ranks.

"For the fans! If @showtimepettis wants to come try out 170 y’all know I’m ready. We both got highlight reels, let’s do it!"

Thompson, a two-time welterweight title challenger, had a somewhat quiet 2018, competing only once and losing a five-round unanimous decision to Darren Till in May’s UFC Liverpool. Whenever he’s ready to fight again, it appears Pettis is at least open to the idea of welcoming Thompson back to the Octagon.

In 21 fights with the UFC and World Extreme Cage fighting, Pettis has only competed at 155 and 145 pounds, but given that he’s fought almost everyone there is to fight in those two divisions, it’s understandable that “Showtime” might be looking elsewhere for his next scrap. His most recent bout was a thriller against Tony Ferguson at UFC 229 in October that he lost after his corner called for a stoppage between rounds two and three.